By Mark Prigg For Dailymail.com

While Google's new $800 Pixel 3 handset may not be groundbreaking in terms of software, it really is one smart phone.

AI seems to permeate every part of its software, from the ability to answer calls for you to being able to almost perfectly predict your morning commute.

It's a great phone, with one caveat - to get the best out of it, you need to let Google collect a lot of data about you.

Scroll down for video 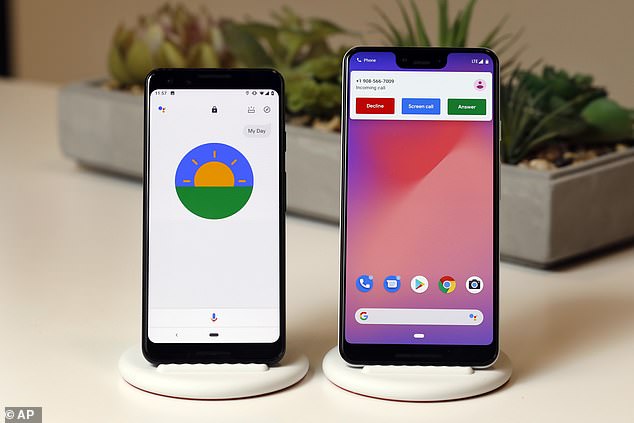 It's a great phone, with every feature you could ask for, from wireless charging and a superb camera to a sleek design - and thankfully the smaller model forgoes the horrific notch on the bigger Pixel XL

We tried out the base Pixel 3, the smaller of the two new handsets Google announced.

It's a great phone, with every feature you could ask for, from wireless charging and a superb camera to a sleek design - and thankfully the smaller model forgoes the horrific notch on the bigger Pixel XL.

One of the most useful features, particularly for American owners plagued by robocalls, is a call screening feature.

When a mystery call comes in, just hit 'Screen call', and Google's voice assistant takes over and asks for a name and purpose of the call.

Transcribed responses appear in real time, so you can decide whether to pick up.

You can even request more information by tapping buttons such as 'Tell me more.'

While great in concept, the reality is a little disappointing - I often found it quicker to take the call and hang up.

However, one can definitely see the potential, if the system as able to screen calls without involving the user. 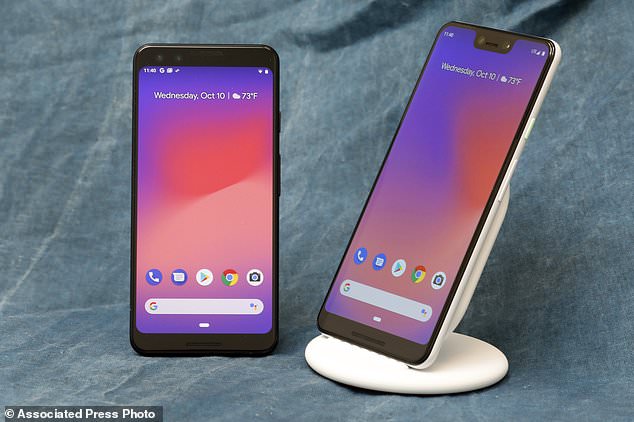 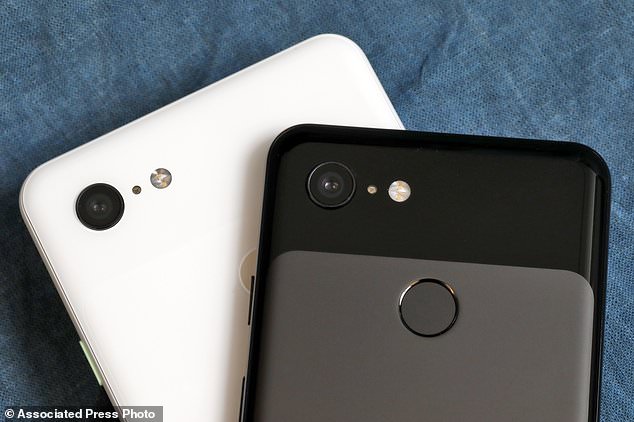 The cameras on the back of the Google Pixel 3 XL, left, and Google Pixel 3 smartphones: AI seems to permeate every part of its software, from the ability to answer calls for you to being able to almost perfectly predict your morning commute.

It is, however, also great for annoying friends and family by fobbing them off with a robotic voice (sorry mum!).

The camera also has some smart features, such as Google Lens, which can extract numbers from business cards, translate menus and even try to identify anything you point the camera at. 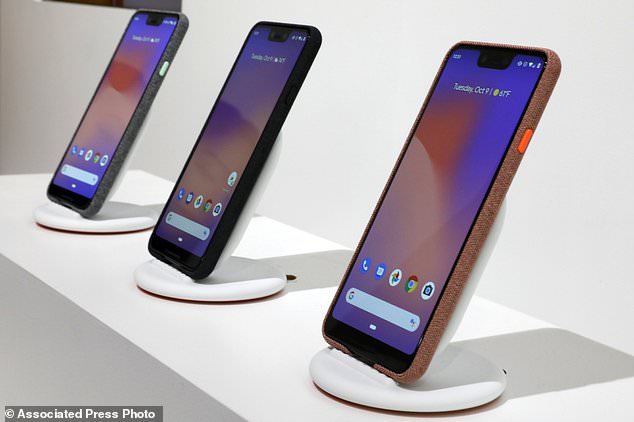 It can also monitor your face, waiting for a smile of funny face to take the perfect selfie, and for regular shots, can capture multiple pictures to choose from.

It also boasts wireless charging, and placing the phone on an optional $79 Pixel Stand charging station, and it can display a rotating set of images from an album you choose, or pick what it thinks are your best snaps.

HOW GOOGLE'S PIXEL 3 CAN ANSWER THE PHONE FOR YOU

Gogole boasts its AI will allow the Pixel 3 to answer calls for you.

'Imagine you're at dinner with family or in a meeting at work and a call from an unknown caller comes in.

'Just tap on 'Screen call' to find out who's calling and why, as well as other information (as prompted by you).

'You'll immediately see a transcript of the caller's responses so that you can then decide whether to pick up, respond by tapping a quick reply (e.g., 'I'll call you back later'), or mark the call as spam and dismiss.

The call screen feature allows the phone to answer calls for you when telemarketers call. The user is able to see the call transcribed in real-time on the device's screen

'Processing the call details on-device means these experiences are fast, private to you, and use up less battery.'

Pixel users in the U.S. will also be the first to get access to an experimental new Google Assistant feature, powered by Duplex technology, which helps users complete real-world tasks over the phone, like calling a restaurant to book a table.

This feature will initially be available later this year in New York, Atlanta, Phoenix and the San Francisco Bay Area to help people book restaurant reservations and will roll out to other U.S. cities in the future.

However, Google addressed the concenrs it coudl fool humans.

'As we develop new calling technologies, we believe it’s critical that we help people understand the context of the conversation.

'We’ll disclose to businesses receiving the call that they're speaking to an automated system, and we have developed controls to protect against spam and abuse, as well as the ability for a business to opt out of receiving calls.

'For Call Screen, we will also let the caller know that a screening service is being used.'

Soon, you'll be able to let Google's facial-recognition technology just pick out photos of your family, including new shots as you take them (though not in the European Union, where privacy regulations are tighter.)

The stand also has some smart features, offering to set your alarms before bed.

It the morning , it can show you how your commute is going, and displays this on the always on screen, a hugely useful, if creepy, feature.

Overall, the Pixel 3 is a superb handset.

It's fast, sleek and everything a flagship device should be.

Pair that with Google's smartest version of Android , and it really does give the iPhone XS a run for its money - albeit with some lingering concerns of whether it has got a little too smart for its own good.

No comments have so far been submitted. Why not be the first to send us your thoughts, or debate this issue live on our message boards.